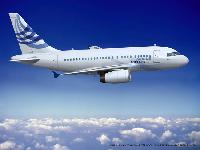 
The Jetalliance Group of Vienna has placed a repeat order for an Airbus Corporate Jetliner (ACJ), adding to its previously ordered Airbus ACJ and three A318 Elites.

Like its other aircraft the new Airbus ACJ will feature a VIP cabin and be powered by CFM56-5 engines.

Jetalliance Flugbetriebs GmbH is one of the world’s leading business-jet enterprises, with a fleet of over 35 aircraft with an average age of only 3.5 years – one of the youngest in Europe. It operates under JAR OPS 1 in Europe, but is also FAA part 129 certificated, allowing it to fly commercially in the USA and Canada.

„Our customers are always hugely impressed by the wide open spaces of the Airbus ACJ Family cabin – a big change from traditional business jets – which is why we keep coming back for more on them,“ says Jetalliance Holding Chief Executive Officer Lukas Lichtner-Hoyer. „We also like the Airbus ACJ Family’s modern design, outstanding take-off performance and excellent reliability“.

Airbus‘ ACJ Family has sold well worldwide, with total sales now approaching the 100 mark. It has done especially well in Europe, including Russia, where it has established itself as the preferred choice at the top end of the market.

„When customers keep coming back for more, you know that you are doing something right, and we like to think that it is the good relations that we strive to maintain with them – as well as the Airbus ACJ Family’s benefits – that makes it all succeed,“ says Airbus Chief Operating Officer, Customers, John Leahy.

Airbus’s ACJ Family, which comprises the A318 Elite, ACJ and A320 Prestige, is the first in business aviation with fly-by-wire controls and side-stick controllers. It also represents an important step in the use of weight-saving carbon fibre composites, pioneered system-wide cost-saving centralised maintenance, and set new standards in advanced fuel-saving aerodynamic design, including wingtip fences as standard.

The Airbus A320 Family, from which the Airbus ACJ Family evolved, has long been the industry benchmark, with more than 5,300 orders and almost 200 operators to its credit – and the figure is growing all the time.