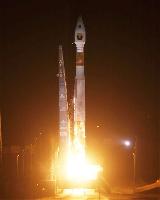 
The Boeing Company [NYSE: BA] today announced that the Orbital Express system, a program to validate spacecraft servicing capability led by the Defense Advanced Research Projects Agency (DARPA), has performed a fully-autonomous „fly-around and capture“ of its NextSat client spacecraft, marking another industry first for the innovative program.

During the five-hour test on June 16, Boeing’s Autonomous Space Transport Robotic Operations (ASTRO) servicing spacecraft used its onboard cameras and advanced video guidance system to separate from, circle and re-mate with the Ball Aerospace NextSat client spacecraft. The test primarily used passive sensors with no active exchange of relative navigation information or involvement by ground controllers.

Positioned in orbit 60 meters above NextSat, ASTRO followed an imaginary line called the „Rbar,“ which extends from the Earth’s center to a satellite and beyond, to capture the spacecraft. The maneuver simulated the direction of approach needed to effectively service a satellite without interfering with its cameras or antennas.

„This scenario validated autonomous fly-around capability, which is needed for inspecting spacecraft,“ said Alex Lopez, vice president of Boeing Advanced Network and Space Systems. „The team also proved that approaching a satellite from ‚minus Rbar‘ means that Orbital Express can conduct on-orbit servicing operations without disrupting satellite service for customers. This capability is considered highly desirable by satellite operators.“

ASTRO and NextSat began the demonstration (Scenario 5-1) in the Mated Nominal mode. At the predicted time, ASTRO’s autonomous systems separated it from NextSat to a range of up to 120 meters. ASTRO then circled NextSat using its sensor systems to continuously track NextSat during the fly-around. If sensor inputs had deviated outside of the established limits, an autonomous safing action would have repositioned the spacecraft to a safe location.

After completing the fly-around, ASTRO maintained its relative position with NextSat at 120 meters for 17 minutes then maneuvered above NextSat to perform a corridor approach to within centimeters of the client spacecraft. The capture mechanism grappled NextSat and performed a soft berth, drawing NextSat and ASTRO together.

The test marked the first unmated operation since mid-May when the Orbital Express team experienced a computer sensor anomaly during the unmated portion of Scenario 3-1. The system’s autonomous safing feature maneuvered the spacecraft to a safe location until the team could re-mate them. The team has since resolved the anomaly from this scenario.

During the next major unmated operation (Scenario 7-1), ASTRO will depart NextSat to a range of four kilometers before approaching the client spacecraft and performing a free-fly capture using its robotic arm.

Orbital Express mission information and demonstration updates can be found at: http://www.boeing.com/orbitalexpress.