AirTran Airways to Relocate its Operations to Airside 4, Terminal B at Orlando International Airport on June 27

AirTran Airways (NYSE: AAI), a subsidiary of AirTran Holdings, Inc., announced today that it will officially relocate its operations at the Orlando International Airport to Airside 4, Gates 90 to 97 in Terminal B, effective June 27, 2007.

ORLANDO, Fla. — „AirTran Airways is very excited about our new location,“ said Bob Fornaro, AirTran Airways‘ president and chief operating officer. „As the fastest-growing airline at Orlando International Airport, this move will allow us more room for expansion and enable us to operate more efficiently while providing our customers with the comfort and convenience they deserve.“

Ticket counters, gates, baggage service offices, administrative offices, operations offices and the aircraft maintenance department will all move from their current locations at Landside A and Airside 2 to Landside B and Airside 4 at Orlando International Airport. The new wing nearly doubles the airline’s capacity to handle customers at the ticket counter. The airline currently has 10 kiosks and six staffed positions for passenger check-in, but will increase to 23 kiosks and four staffed positions, allowing for a much quicker check-in process with this move.

AirTran Airways, a Fortune 1000 company and one of America’s largest low- fare airlines with more than 8,700 friendly, professional Crew Members, operates more than 700 daily flights to 56 destinations. The airline’s hub is at Hartsfield-Jackson Atlanta International Airport, where it is the second largest carrier. AirTran Airways‘ aircraft features the fuel-efficient Boeing 737-700 and 717-200 to create America’s youngest all-Boeing fleet. The airline is also the first carrier to install XM Satellite Radio on a commercial aircraft and the only airline with Business Class and XM Satellite Radio on every flight. For reservations or more information, visit http://www.airtran.com (America Online Keyword: AirTran). 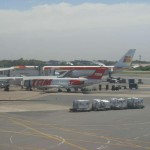 Prospecting new passengers in the Asian market, we develop a commercial policy intended for the Chinese clients

Continental Airlines (NYSE: CAL), the U.S. carrier with the most presence in Mexico, today announced that it will relocate flight operations to Terminal 2 at Mexico City International Airport effective Feb. 19.