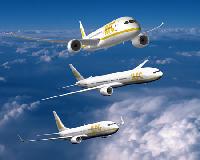 ILFC will expand its fleet with a new order for 50 additional 787 Dreamliners. ILFC will take delivery of its first 787 Dreamliner in 2010, with additional airplanes arriving through 2017. Today’s order also includes 10 Next-Generation 737s, which extends ILFC’s delivery stream through 2012

In addition, Boeing and ILFC disclosed an order booked earlier this year exercising options for two 787-8 Dreamliners and one 777-300ER (Extended Range) for delivery in early 2009, which was previously listed on Boeing’s Orders and Deliveries Web site and attributed to an unidentified customer.

„This order is the culmination of many months of intensive negotiations between Boeing and ILFC. We are experiencing strong leasing demand from airlines all over the world for the Boeing 787 Dreamliner,“ said Steven F. Udvar-Hazy, ILFC chairman and chief executive officer. „As the largest wide-body owner and lessor, we want to be responsive to our airline customers in providing the most economical, fuel efficient and environmentally friendly new-generation aircraft for our global airline clientele.“

„Boeing is extremely proud of its successful partnership with ILFC over the past 30 years,“ said Scott Carson, president and chief executive officer, Boeing Commercial Airplanes. „ILFC has chosen Boeing to provide to its customers around the world the very best capability and value in commercial airplanes. This order underscores the record-setting market acceptance of the Boeing 787 Dreamliner within the financial community and among airlines around the globe.“

ILFC is an international market leader in the leasing and remarketing of advanced-technology commercial jet aircraft to airlines around the world. ILFC owns a portfolio valued at more than $48 billion, consisting of approximately 900 jet aircraft.

The 787 Dreamliner, which will enter service in 2008, provides passengers with a better flying experience and operators with a more efficient commercial jetliner. Using 20 percent less fuel per passenger than similarly sized airplanes, the 787 is designed for the environment with lower emissions and quieter takeoffs and landings. Inside the airplane, passengers will find a new interior environment with cleaner air, larger windows, more stowage space, improved lighting and other passenger-preferred conveniences.

The 787 Dreamliner is the fastest-selling commercial airplane in history — 45 customers have announced 634 orders since its launch in April 2004. Overall, the 787 Dreamliner order book is valued at nearly $100 billion at current list prices.

The Next-Generation 737 family is the most technologically advanced airplane family in the single-aisle market. The Next-Generation 737’s market success is confirmed by air finance investors, who consistently rank it as the most preferred airplane due to its wide market base, superior performance efficiency and lowest operating costs in its class.