The system was supplied and deployed in an extremely short period of time through MS Spetstelecom, a federal TETRA operator and Motorola partner in the region, following the decision made by the Russian Ministry of Information Technology and Telecommunications, and the Government of Samara region.

Working with MS Spetstelecom, Motorola supplied a complete communications solution to the EU-Russia Summit. This included Motorola’s TETRA network technology as well as its MTP800 and MTH800 radios to provide optimum coverage. The system supported over 500 subscribers at the two-day event, including the Government of Samara region, security and law enforcement agencies, both before and during the Summit. The Summit was attended by leaders of a number of European countries, including Russian president Vladimir Putin and German chancellor Angela Merkel.

Telecommunications departments of all agencies involved quoted excellent signal quality, a large reliable service area and a definite advantage of both voice features and the ability to constantly monitor the locations of all radio users displayed on dispatch console maps in all agencies.

Commenting on the project, Boris Ardalin, Minister of transportation and telecommunications, Samara region Government, said: “We are continually striving to make sure that security standards at government events are the highest possible. The solution provided us with a reliable and resilient communications network that we needed to cope with the heightened security demands of a major international summit.”

Youry Gorshkov, chairman of the board of directors of MS-Spetstelecom commented: „Our company enjoys a long-time close partnership with Motorola, and we appreciate the unparalleled quality of its products. We had deployed a Motorola system in the Samara region back in 2004, and it still works very well. That is why we immediately contacted Motorola for infrastructure equipment and radios when it became necessary to improve the quality of service in a new part of Samara, from the airport, along the complex terrain, and all the way to the resort of Volzhsky Utyos where the Summit was to take place. Motorola successfully managed to manufacture, collect and ship the necessary equipment from its factories in record time. We were just finishing building, assembly and preliminary works at the sites when the base station equipment arrived just in time to be easily mounted and commissioned. It is hard to believe that a complex multi-site system could be built from scratch in as little as one month! It was made possible thanks to a concerted effort of many companies working on this project, as well as excellent coordination and assistance provided by TETRARUS.”

“Ensuring public safety and security is a critical priority for high profile political events,” said Manuel Torres, vice president, Motorola Networks & Enterprise, EMEA. “Motorola’s TETRA systems are in use around the world, delivering critical communications for nationwide public safety systems, as well as commercial businesses. We are extremely pleased that the Samara Government chose a TETRA network to support such a high profile event as the EU-Russia Summit.”

Motorola is committed to innovation on the TETRA platform. This includes the creation of applications and solutions to enable customers to realize the benefits of, for example, its Dimetra Compact IP System which provides integrated voice and data capability. Motorola is a leading innovator in TETRA including the development and deployment of TETRA2 services and TEDS, the next-generation TETRA network specification designed to facilitate higher data transfer speeds.
# # #

About Motorola
Motorola is known around the world for innovation and leadership in wireless and broadband communications. Inspired by our vision of seamless mobility, the people of Motorola are committed to helping you connect simply and seamlessly to the people, information and entertainment that you want and need. We do this by designing and delivering „must have“ products, „must do“ experiences and powerful networks — along with a full complement of support services. A Fortune 100 company with global presence and impact, Motorola had sales of US $42.9 billion in 2006. For more information about our company, our people and our innovations, please visit http://www.motorola.com. 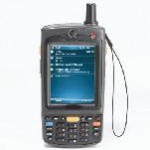 Motorola, Inc. (NYSE: MOT) announced a special edition of the new RAZR2, available in limited quantities, in time to celebrate the holiday season in style. The signature RAZR2 form factor has been re-imagined and reconfigured in the most luxurious materials – bathed in gold and clothed in snake-like skin, and includes a full suite of […]

Motorola, Inc. (NYSE: MOT) expanded its offering of devices for “everyday communication” with the introduction of seven new W Series handsets. The new devices – W156, W160, W175, W180, W206, W213, and W377 – are inspired by the vision of delivering Motorola’s high-tier style and innovation at an affordable price point.