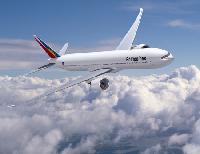 
The Boeing Company [NYSE: BA] and Philippine Airlines (PAL) today announced that the airline has increased its fleet plans for Boeing 777-300ERs to a total of six airplanes with a new order for two of the popular and efficient twinjets. The order is an exercise of purchase rights disclosed in March when PAL placed an order for two 777-300ERs.

In addition, PAL has an agreement in place to lease two 777-300ERs from GE Commercial Aviation Services.

The two new airplanes have a list price value of about $500 million.

„Our future fleet of Boeing 777-300ERs will allow PAL to provide the best in passenger service to the United States, while providing increased efficiency in our operations,“ said Jaime J. Bautista, president of Philippine Airlines. „Also, I am certain that our passengers will appreciate the world-class interior comfort and amenities of the 777-300ER.“

„Philippine Airlines is a very forward-looking carrier that understands how the 777-300ER will help provide passengers with an exceptional service experience, while achieving increased efficiency for the airline in the midst of high fuel prices,“ said Rob Laird, vice president, Sales – Boeing Commercial Airplanes.

PAL, the national flag carrier of the Philippines, conducted its first flight March 15, 1941, and has been operating longer than any other airline in Asia. It has a modern fleet and a route network that spans 24 foreign cities and 18 domestic destinations.

The fuel-efficient 777-300ER is the world’s largest long-range twin-engine jetliner and is capable of carrying approximately 365 passengers in Philippine Airlines‘ two-class configuration, with a maximum range of 7,930 nautical miles (14,685 kilometers).

As of May 31, 21 customers have ordered 267 777-300ERs. Boeing currently has unfilled orders for the model exceeding 175 airplanes, with a value of more than $44 billion at list prices.

Since its launch, the entire 777 family of airplanes has consistently captured 65 percent of the 300-to-400-seat market segment.