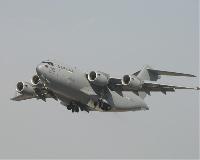 The newest C-17 is named the „Spirit of the Constitution“ in honor of Delaware being the first of the original 13 U.S. colonies to ratify the U.S. Constitution on Dec. 7, 1787. This is the 165th C-17 that Boeing has delivered to the U.S. Air Force.

„The Air Force chose to name Dover’s first C-17 the ‚Spirit of the Constitution‘ to honor the heritage of our host state of Delaware,“ said Col. Steven B. Harrison, 436th Airlift Wing commander.

The Delaware base will officially welcome the new C-17 on June 4, when the Commander of the U.S. Air Force Air Mobility Command, Gen. Duncan J. McNabb, flies the Globemaster III into Dover for a planned ceremony.

Delaware’s 436th Airlift Wing, which has been preparing for its C-17s since early 2006, will receive another six aircraft by the end of 2007. Boeing will deliver the remaining six aircraft in 2008. Earlier this year, the wing activated its 736th Aircraft Maintenance and 3rd Airlift Squadrons during a joint change of command ceremony.

The new C-17s will give Dover AFB valuable tools in the fight against terrorism, while allowing it to support humanitarian missions when needed, Harrison said.

„The C-17 is able to land on short, minimally-prepared airfields, does the work of multiple airlifters and is the most reliable, flexible and technologically advanced airlift aircraft ever built,“ said Dave Bowman, Boeing vice president and C-17 program manager.

The U.S. Air Force’s existing C-17 fleet has amassed more than 1.2 million flying hours — and in the global war on terrorism, has flown combat missions with record-setting reliability rates. With a payload of 160,000 pounds, the C-17 can take off from a 7,600-foot airfield, fly 2,400 nautical miles and land on 3,000-foot dirt runways. The C-17 also is a key component for providing quick and efficient humanitarian aid to the victims of natural disasters such as tsunamis, hurricanes and earthquakes.

Boeing is on a multi-year production contract to design, build and deliver 190 C-17s to the U.S. Air Force through mid-2009. The worldwide fleet also includes two Royal Australian Air Force (RAAF) C-17s and four United Kingdom Royal Air Force (RAF) C-17s. Boeing will deliver two more aircraft to the RAAF and one more aircraft to the RAF, all in 2008. Later this year, Boeing will deliver the first of four C-17s to Canada.