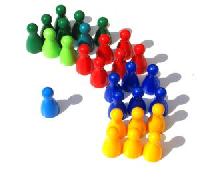 
Boeing [NYSE:BA] has become one of the newest members of the Billion Dollar Roundtable, an organization that brings together major corporations that make meaningful and measurable contributions to the economic growth of woman-owned and minority-owned companies. Don McKneely and Sharon Patterson, roundtable co-founders, formally introduced Boeing as one of the newest member companies at a reception last night in New York.

„As a co-founder and host of the Billion Dollar Roundtable, I applaud Boeing for its commitment to support diverse firms and the communities where they operate,“ said McKneely, chairman of the organization.

The roundtable was created in 2001 to recognize and bring together corporations that achieved spending of at least $1 billion annually with minority- and woman-owned suppliers. The organization promotes and shares best practices in supply chain diversity excellence, and encourages dialogue on common issues, opportunities and strategies related to diverse business.

Boeing, which spent more than $2 billion with minority- and woman-owned businesses in 2006, was welcomed as part of the roundtable’s biannual induction of new member companies. The company was selected following a rigorous application and review process, including an independent third-party audit to verify its eligibility for the roundtable.

Joan Robinson-Berry, Boeing director of Supplier Diversity for its Integrated Defense Systems business, will represent the aerospace company on the roundtable’s board of directors.

„Boeing has a long-standing commitment to small and diverse businesses,“ Robinson-Berry said. „We strive to find opportunities to utilize the skills and technology of these companies, and for more than 50 years we have maintained a formal supplier diversity program.

„I am thrilled to have the chance to share through the roundtable the creative ways Boeing has sought and found opportunities for small and diverse businesses over the years,“ Robinson-Berry continued. „I also look forward to the chance to learn from other roundtable members, because working with a vibrant small and diverse supplier community is good for our customers, good for the economy and good for Boeing.“

Boeing joins on the roundtable outstanding corporations in the telecommunications, automotive, aerospace, consumer goods, and retail industries. The combined Billion Dollar Roundtable membership celebrated collective purchases of more than $24 billion in products and services from minority- and woman-owned suppliers in 2006.

„Boeing recognizes that diversity brings strength, innovation and flexibility to our supply base,“ said John Tracy, Boeing senior vice president of Engineering, Operations and Technology, whose responsibilities include companywide oversight of the Supplier Management function. „Tapping the skills and technologies of small, minority- and woman-owned businesses has played a vital role in helping us maintain our position as a global leader in aerospace–and will continue to do so.“