„Today we begin assembling the first airplane of a new generation,“ said Scott Strode, 787 vice president of Airplane Definition and Production. „The 787 not only will revolutionize air travel, it represents a new way of building airplanes.“

With 568 firm orders from 44 airlines, the 787 is the fastest-selling new airplane in aviation history. The 787 production system was designed using Lean manufacturing techniques in a simplified final assembly process.

„The 787 production system is the culmination of the lessons we’ve learned building previous airplanes,“ said Steve Westby, 787 vice president of Manufacturing and Quality. „Using composites on the 787 airframe has a number of manufacturing advantages. We are able to build huge structure in just one piece, which means we essentially have six major end items coming together in final assembly — the forward, center and aft fuselage sections, the wings, the horizontal stabilizer and the vertical fin. „

Since the 787 is assembled from these large assemblies rather than many smaller pieces, traditional monument assembly tools are not necessary. Portable tools, designed with ergonomics in mind, move the assemblies into place. No overhead cranes are used to move airplane structure.

„A composite airframe also means less waste in production and fewer hazardous materials used during the assembly process,“ Westby said. „This is good news for the environment and for our team of manufacturing technicians building the airplane.“

Although the first airplane will take about seven weeks to assemble, the 787 team looks to continuously improve flow time as production ramps up. Ultimately, a 787 will roll out of the factory every three days. 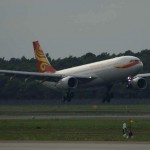