The gigantic composite wings for the all-new Boeing [NYSE: BA] 787 Dreamliner were delivered to Everett at 4:10 a.m. PDT yesterday.

Manufactured by Mitsubishi Heavy Industries at its facility in Nagoya, Japan, each wing is 98 feet long. Standing on edge in custom-made tooling, the wings were delivered together to Boeing via the Dreamlifter, a specially modified 747-400 used to transport 787 major assemblies. The 787 is the first commercial aircraft to use composite materials as its primary structure. It is also the first Boeing aircraft featuring an all-composite wing.

„A composite wing of this size has never been built before,“ said Scott Strode, 787 vice president of Airplane Definition and Production. „This is a tribute to our fantastic team. We believe the Dreamliner sets a new standard for how commercial airplanes will be made in the future.“

The wings were immediately delivered to the 787 final assembly factory. Additional work — including attaching the wingtip and movable surfaces — will be completed by Boeing. The total wingspan of a 787 is 197 feet.

The 787 Dreamliner is the fastest-selling airplane in aviation history, with firm orders for 567 airplanes from 44 airlines. 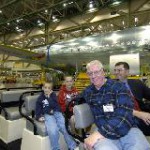 The Boeing Company’s [NYSE: BA] Tour Center welcomed its three-millionth visitor Nov. 12. The Boeing Tour Center is part of the Future of Flight Aviation Center, which is a unique learning and interpretive facility designed to let visitors experience the marvel of commercial jet aviation and production.

Three large composite fuselage sections arrived in Everett today for the all-new Boeing (NYSE: BA) 787 Dreamliner. The all-composite forward section — known as section 41 and shown here wrapped in white — is manufactured by Spirit AeroSystems at its facility in Wichita, Kan. The complex structure is 21 feet in diameter and 42 feet […]