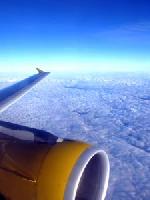 The airline’s decision is significant because ANA is the first Japanese airline to use Boeing’s EFB on a commercial flight and because it represents the first Boeing EFB purchase by ANA, one of the world’s leading 777 operators. Boeing delivered ANA’s first 777-300ER with the Electronic Flight Bag in April. ANA has taken delivery of 39 777s and has eight more on order.

The Boeing Class 3 EFB is a pilot-dedicated flight-deck computer integrated into an airplane’s avionics that has become a must-have device for airlines looking to improve both the safety and efficiency of their 777 fleets.

„In today’s competitive environment, airlines must be able to show the flying public and the financial community that they are embracing the latest available technology to make flights as efficient, comfortable and reliable as possible,“ said Mitsuo Morimoto, ANA Executive vice president, Flight Operations. „Our selection of Boeing’s Electronic Flight Bag sends exactly the right message to our customers and other stakeholders.“

„ANA is a respected airline that other airlines watch,“ said Dan da Silva, vice president of Sales and Marketing for Boeing Commercial Aviation Services. „When an airline of that stature orders Boeing’s Class 3 EFB, it sends a powerful message to all the world’s airlines that the Class 3 EFB is reaching a tipping point.“

Boeing’s Class 3 EFB can serve as a critical communications gateway between the airplane in the sky and an airline’s operations center and maintenance department on the ground. The EFB, designed to be integrated with other Boeing e-Enabled solutions such as Airplane Health Management and Maintenance Performance Toolbox, is a core technology in Boeing’s vision of an e-Enabled air-transport system in which data, information and knowledge can be shared and used across an aviation enterprise.

Boeing’s EFB also has the capability to run advanced communications systems that improve aviation safety both in the air and on the ground. Applications currently being tested include some that improve the „situational awareness“ of pilots by allowing them to follow airplane movements on the ground and in the air on a video screen. Some carriers have successfully tested Boeing’s EFB to help reduce fuel consumption and reduce the impact of airplane noise pollution around airports.

Using software developed by Boeing and its subsidiary, Jeppesen, the Boeing EFB provides an open-architecture platform that allows the airline to add its own documents or third-party applications.