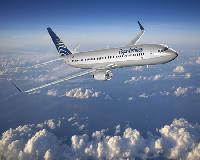 The order brings to 34 the number of Next-Generation 737s Copa has ordered. The four 737s announced today were previously posted to an „unidentified customer“ on the Boeing Commercial Airplanes orders and deliveries website.

„Copa Airlines continues to validate the technology and economics of the Next-Generation 737 by providing passengers with innovative route options and increased flight frequencies using the 737,“ said Boeing Commercial Airplanes Vice President, Sales, for Latin America and the Caribbean, John Wojick. „Flying out of Panama with the Next-Generation 737s, Copa is able to provide passengers with flights where they want to go, nonstop.“

Copa now operates 24 Next-Generation 737s, with 10 – including those announced today — remaining to be delivered.

„This new order reinforces our commitment to our passengers by allowing us to continue expanding through additional frequencies and destinations, offering our passengers the most comfortable and convenient options for travel between the most important Latin American cities“ said Pedro Heilbron, CEO of Copa Airlines.

Copa was the first carrier in the Americas to incorporate blended-winglets on the 737-700. All of its Next-Generation 737s use the distinctive curved wing ends, which improve fuel efficiency and lift while reducing engine wear and carbon dioxide emissions. Copa also was the first in the region to order Next-Generation 737s with the Vertical Situation Display (VSD) system, which provides pilots with an easy-to-understand flight-path view.

Copa operates from Tocumen International Airport, a time-saving hub on long routes between the United States, South and Central America, and the Caribbean. It flies four of the world’s longest 737 routes from there — to Buenos Aires, Santiago, Sao Paulo and Los Angeles — thanks to the 737’s exceptional range.

The Next-Generation 737 is the newest and most technologically advanced single-aisle airplane. It flies higher, faster and farther than previous models and competitors. In addition, its flight deck features the latest liquid-crystal flat-panel displays and is designed to accommodate new communications and flight-management capabilities.