Technology and Training Key to Progress from the Partnership for Lebanon

Following the announcement of a collaborative effort with other corporations to help revitalize Lebanon, Intel Chairman Craig Barrett today dedicated new projects to improve education, healthcare and computer access to the Internet for its citizens.

Barrett’s trip is the latest on behalf of the Partnership for Lebanon. Through the group, Intel Corporation, Cisco Systems, GHAFARI Inc., Microsoft and Occidental Petroleum are providing critically needed resources to bring long term economic growth and stability to the country.

„It’s gratifying to see concrete results at advancing the economic and social foundations of Lebanon thorough Intel’s work with the US and Lebanese private sectors,“ said Barrett during a day filled with tours, unveilings and initiatives. They include:

„Access to education and technology increases the opportunities for the people of Lebanon,“ said Barrett.

At a stop in Beirut, Barrett announced Intel is also increasing technical and doctor training support for a Telemedicine Program at one of Lebanon’s top hospitals, American University of Beirut Medical Center (AUBMC) and the Nabatiyeh Governmental Hospital in Nabatiyeh. The Telemedicine systems provide the hospitals with real-time video consultation between physicians kilometers apart, the ability to share data and to diagnose patients from afar.

Without Telemedicine, Nabatiyeh citizens needing a specialist would have to travel to Beirut, a trip that can be long and arduous.

„The Nabatiyeh-Beirut Telemedicine Program could not come at a better time,“ said Dr. Nadim Cortas, Vice President for Medical Affairs and Dean of the faculty of medicine and the American University of Beirut Medical Center. „Since last summer, there has been an increase in eye and skin problems due mainly to crowding, particularly among the residents of South Lebanon. Now we can bring medical expertise to more people, and faster than before.“

The innovation gives local doctors the ability to access the latest medical data and get second opinions from specialists and medical centers hundreds of kilometers away.

Since the start of the program in 2006, the Partnership for Lebanon has supplied critical resources for reconstruction efforts. The group is focused on job creation, workforce training and education, rebuilding the country’s communications and computing capabilities, providing connectivity to communities and government, and responding to crisis.

Intel’s goal through these efforts, which are an extension its World Ahead Program, is not only to bring affordable PCs and Internet access to developing communities. But also to train teachers and provide the technology education needed to make a meaningful difference in people’s lives. 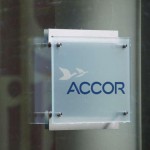 The Board of Directors of Accor that convened on August 27, 2013, chaired by Philippe Citerne, decided to appoint Sébastien Bazin as Chairman and CEO of Accor.