Boeing 777-200LR Worldliner Changing How Passengers Travel Around the World 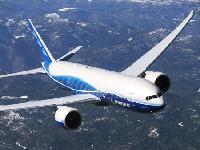 Boeing 777-200LR Worldliner Changing How Passengers Travel Around the World

With several airlines scheduled to take delivery of new Worldliners this year, the newest 777 to enter service is set to change how passengers travel by offering airlines more flexibility to serve the nonstop routes that passengers demand.

„The Boeing 777-200LR supports our business plan to grow Emirates‘ route structure to include new nonstop flights to destinations worldwide, including the West Coast of the United States and South America,“ said Emirates Chairman H.E. Sheikh Ahmed bin Saeed Al-Maktoum. „The 777-200LR will complement our existing fleet of 777 jetliners, soon to be the world’s largest, and offer our passengers the exceptional level of service and comfort they’ve come to expect from Emirates.“

One of the routes Emirates plans to open with a 777-200LR is a nonstop flight between Sao Paulo and Dubai, making it the first time an airline has offered nonstop service between the Middle East and South America. Air India plans to open a new nonstop route between Mumbai and New York. To date, the 777-200LR has won 40 orders from seven customers.

The 777-200LR is capable of flying up to 9,450 nautical miles (17,500 km), enabling the airplane to connect virtually any two cities around the world nonstop, carrying 301 passengers in a typical three-class configuration. Also, the 777-200LR can carry a full cargo load on routes where other airplanes are payload limited. This gives airlines the capability to carry the same number of passengers farther, and with additional revenue-generating cargo.

„The GE90-110B1L engine has performed exceptionally well on the Boeing 777-200LR airplane,“ said Tom Wygle, general manager of the GE90 program at GE Aviation. „Based on the proven technologies of the GE90 engine family, the engine has demonstrated an outstanding reliability record, fuel efficiency and low cost of ownership.“

The 777 family of airplanes is the market leader in the 300 to 400-seat segment, capturing more than 65 percent of that market. To date, 48 customers have placed 918 orders for the efficient, reliable and passenger-pleasing 777 jetliner. Boeing continues to enhance the 777 family with the recent introduction of two new longer-range models and a freighter version currently in development.