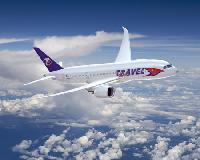 The airline is increasing its efficiency in the long-haul charter market by offering direct flights to holiday destinations. The order is valued at $153 million at list prices.

Travel Service already operates an all-Boeing fleet of 10 737s, including eight Next-Generation 737-800s. In 2006 Travel Service placed an order for two Next-Generation 737-900ERs, Boeing’s newest addition to the 737 family. The company offers charter flights to more than 233 airports on four continents, as well as low-cost scheduled service to major European destinations through its Smart Wings brand. The airline celebrates its 10th anniversary this year.

„The purchase of the Boeing 787 Dreamliner allows us to offer passengers what they want: point-to-point, nonstop flights to their favorite destinations in a state-of-the-art cabin environment,“ said Roman Vik, chairman of Travel Service. „As a 737 operator, we have first-hand experience of Boeing’s superior products, their reliability and efficiency. In analyzing the 787, we concluded that the Dreamliner will bring us those same, outstanding attributes.“

The 787 will use 20 percent less fuel than today’s airplanes of comparable size, and provide airlines with up to 45 percent more cargo revenue capacity. Its long range allows carriers to bypass inconvenient connections at crowded hub airports.

„With the 787 Dreamliner, Travel Service can optimize the efficiency of its long-haul operations and offer a superior product to its customers,“ said Marlin Dailey, vice president of Sales for Europe, Russia and Central Asia, Boeing Commercial Airplanes. „This order signifies a new direction in our relationship with Travel Service, an all-Boeing operator in the Czech Republic. It further demonstrates the flexibility and versatility of the 787 to serve a variety of markets and business models.“

Since launch in April 2004, the Boeing 787 Dreamliner has logged orders from 39 customers for 491 airplanes, making it the most successful launch of a commercial airplane in Boeing’s history. Rollout and first flight of the 787 are scheduled for later this year, followed by entry into service in 2008.