Qantas said the first visit of the Airbus A380 to Los Angeles yesterday (local time) was an important milestone for the airline.

SYDNEY – The Executive General Manager of Qantas, Mr John Borghetti, said Qantas would be the first to operate the A380 to Los Angeles, in the second half of 2008. “The A380 generates incredible levels of interest wherever it goes,” Mr Borghetti said. “Qantas has worked with Airbus, the City of Los Angeles and Los Angeles World Airports to make the aircraft’s visit to the US west coast a reality.

“As well as being involved in ceremonial activities, the aircraft participated in valuable airport compatibility trials.”

Mr Borghetti said Qantas had 20 A380s on order. “The A380 will revolutionise air travel and deliver significant benefits to our business, to our customers and to the environment,” he said. “We have an exceptional inflight product designed for the Qantas A380, which will offer enhanced levels of comfort and space.

“Developed in association with Qantas Design Director, award-winning industrial designer Marc Newson, the state-of-the-art product we have planned for all cabins will be incredibly exciting.

“We have already provided a sneak preview of the contemporary style and luxury our customers can expect, with new designer amenity kits, sleeper suits, crockery, cutlery, glassware and soft furnishings to be launched in our International First and Business cabins from 25 March.

Mr Borghetti said Qantas would operate its first A380 services to from Sydney and Melbourne to Los Angeles after taking delivery of its first aircraft in August 2008. 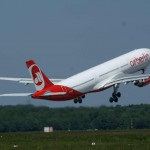 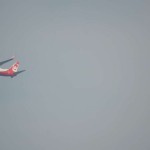