Boeing and Azerbaijan Airlines Finalize Order for 787s and 737s 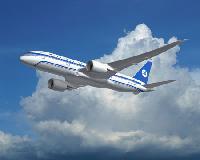 Boeing and Azerbaijan Airlines Finalize Order for 787s and 737s

Azerbaijan Airlines, based in Baku, Azerbaijan, becomes the first airline throughout the republics of the former Soviet Union to order the 787 and the 737-900ER. The order is valued at $609 million at list prices.

„This order is a momentous step in our history,“ said Jahangir Askerov, director general of Azerbaijan Airlines. „With the twin-aisle 787, we will enter the long-haul market for the first time. By expanding our fleet with long-haul twin-aisle airplanes, we will offer our customers many more choices for far-away destinations. We are eager to enter this new chapter in our proud history, and are delighted to do it with the most capable and comfortable airplanes in the world.“

The carrier will operate the 787 on routes to the East, Southeast Asia and North America. The 737-900ERs will be placed on routes to Europe, Russia and other regional destinations.

Azerbaijan Airlines selected the General Electric GEnx engine to power its 787s. Launched in April 2004, the 787 Dreamliner is the world’s newest and most technologically advanced commercial jetliner. It offers a broad inventory of innovations that make it more fuel efficient, more economical for airlines and more comfortable for passengers.

The 787 will use 20 percent less fuel than today’s airplanes of comparable size and provide airlines with up to 45 percent more cargo revenue capacity. Its long range allows carriers to offer passengers the point-to-point service they prefer, bypassing inconvenient connections at crowded hub airports.

The first flight of the 787 is scheduled for 2007, with entry into service in 2008. With 468 orders from 37 customers around the world, the Dreamliner is the most successful new airplane introduction in history.

The 737-900ER is Boeing’s newest addition to the popular line of 737 single-aisle aircraft. Boeing launched the 737-900ER in 2005 as a higher-capacity, longer-range complement to the 737 family. The 737-900ER is the largest member of the Next-Generation 737 airplane family. It seats up to 215 passengers and flies up to 3,200 nautical miles (5,900 kilometers), making the range comparable to the 737-800. The 737-900ER features Blended Winglets, which enable an additional three to five percent improvement in fuel efficiency.