Deliveries of these four airplanes will take place from 2011 through 2013. The value of the new order is approximately $700 million at list prices. The airplanes were added to the Boeing Orders & Deliveries Web site last week, attributed to an unidentified customer.

Air New Zealand was the second airline to order the 787, placing its initial order for two airplanes in 2004. The following year, Air New Zealand ordered two additional Dreamliners. The first of the airline’s 787s will be delivered in 2010.

„Air New Zealand has proven itself to be a very progressive airline in managing its costs while maintaining high levels of service and reliability,“ said Stan Deal, vice president, Sales – Boeing Commercial Airplanes. „We are very proud to partner with Air New Zealand in providing the airplanes that will allow the airline to build upon its great international reputation.“

„These new aircraft are important to Air New Zealand’s growth plans over the next decade,“ said Rob Fyfe, CEO of Air New Zealand. „Their long-haul capabilities will reach to a variety of destinations in Africa, India, the Americas and Asia, bringing some exciting prospects that we can pursue. Additionally the 787 has an industry-leading emissions profile which furthers Air New Zealand’s environmental initiatives.“

Air New Zealand, during its December announcement, said it was committed to launching at least one new international route every year. 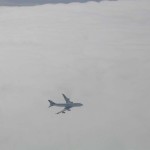