Aegean Airlines is the Best Regional Airline in Europe 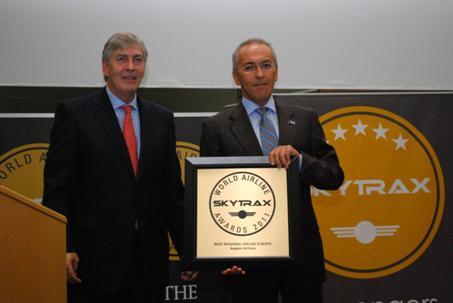 Aegean Airlines is the Best Regional Airline in Europe

Athens – AEGEAN, the largest Carrier of Greece and member of Star Alliance, was named winner of the Best Regional Airline Europe award at the 2011 World Airline Awards, in a ceremony held in the French Air and Space Museum at the Paris Air Show.   In addition AEGEAN is the runner-up in the World’s Best Regional Airline category and in Airline Staff Service Excellence in Europe category.

Voted by over 18.8 million airline passengers from 100 different nationalities, the World Airline Awards are the most prestigious and respected quality recognition of front-line product and service standards across the world airline industry. With 200 airlines featured, the awards reflect customer satisfaction levels across 38 different items of airline front-line product and service.

Mr. Dimitris Gerogiannis CEO of AEGEAN, stated: „All of us in AEGEAN are extremely proud, because we have been honored with this award by the most important audience: our passengers. Particularly at this conjuncture, it is very important for a Greek company to be recognized and be ranked amongst the best at a European, as well as at a global level. This kind of distinctions strengthen our commitment to uphold the high level of services we provide, at the same time showing that there is a bright side of Greece; all we need to do is believe in it and commit to it each and every day.“

Mr. Edward Plaisted, CEO of Skytrax commented: ““Aegean Airlines can be proud of their achievement of being named Best Regional Airline Europe. This is a fantastic achievement, having also been named as the runner-up in the global award. Having also broke into the top-25 airlines globally, this has been a great year for the Aegean at the World Airline Awards.”

The World Airline Awards are based on the World Airline Survey by Skytrax, and respected around the world as the Passengers Choice awards. The survey was operated between July 2010 and May 2011, during which time air travellers completed a wide range of survey nominations – for the Airline of the Year title, together with regional and other Airline Award categories. The Survey includes over 200 airlines, from the largest international airlines to small domestic carriers, and measured standards across more than 38 different items of airline front-line product and service. The study analyses customer satisfaction for the Airline Passenger Experience, across the Airport and Onboard environments – check-in to boarding, onboard seat comfort, cabin cleanliness, food, beverages, IFE and  staff service.

The World Airline Survey is regarded as the primary benchmarking tool for Passenger Satisfaction levels of airlines throughout the world – constituting a unique survey format based upon analysis of both business and leisure travellers, and across all cabin travel types.