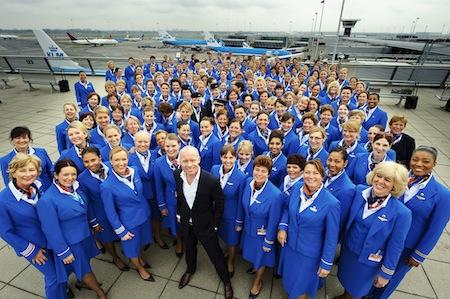 
More than 11.000 female cabin attendants, ground attendants and pilots at KLM and KLM Cityhopper will don new uniforms as of today

AMSTELVEEN – The new uniform has a feminine cut, with a modern, fresh and confident look. „It’s great to see the wonderful outfit that has been created. I hope it will be worn with pride,“ says KLM President & CEO Peter Hartman. The design is completely new, but the uniform is still the same KLM blue introduced in 1971. KLM is constantly seeking to innovate. This is borne out by the new uniform. „By introducing this new uniform in these challenging times, we underscore our faith in the KLM brand,“ says Peter Hartman. The uniform was designed by Dutch couturier Mart Visser.

Research has shown that customers value the KLM brand because it represents typical Dutch pragmatism. KLM has responded to this by adding a touch of orange, the national colour, to its KLM blue. The orange features in the trimming on the lining of the uniform for cabin and ground attendants, and in the uniform scarf.

KLM is an industry leader in corporate social responsibility. The airline has taken numerous innovative initiatives to reduce its impact on the environment. KLM is the first airline in the world that will recycle the textile of its old uniforms.

No new uniforms will be made available for male staff at this moment.