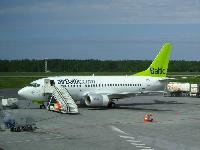 
Latvian airline airBaltic carried overall 199,085 passengers in January 2010 (from Riga, Vilnius and Tallinn), representing 12% more than in the same month in 2009, when airBaltic transported 177,197 passengers

Riga – In January of this year, the number of passengers at the base of airBaltic in Riga has increased by 20% compared to the same period last year.

The 15-minute flight punctuality indicator for airBaltic was at a level of 85.9% in January 2010. This means that more than 85 of every 100 airBaltic flights in January departed at the planned time or with a delay of no more than 15 minutes.