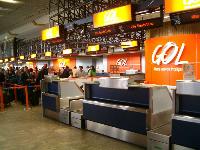 São Paulo – Management Comments In December, GOL’s air traffic demand grew by 34.8% in relation to the same period last year, reflecting both the company’s better positioning in its markets in 2009 (higher frequency and regularity between Brazil’s main airports, strong cost advantages, the revitalization of SMILES, Latin America’s largest mileage program, and other factors), and increased demand, which was driven primarily by Brazil’s economy recovery signs. Consequently, domestic market demand grew by 36.2% in relation to December 2008, and by 14.7% in relation to November 2009, reflecting the seasonal increase in demand, given the fact that the summer high season begins in December and the higher number of days in the month (30 days in November, versus 31 in December). Average daily demand was 11.0% higher in relation to the same period. International demand was up 23.9% in relation to December 2008, mainly reflecting the adjustments to the Company’s international network, which sought to improve this segment’s profitability by launching new routes between Brazil and the Caribbean with flights to Aruba and Curaçao, and the adjustments to the frequency of flights to Argentina, Colombia, Chile, Bolivia and Venezuela. In addition, international traffic benefited from the decline in the U.S. dollar exchange rate and the economy recovery in Brazil and South America. International traffic also recorded nominal growth of 17.5% in relation to November, impacted by seasonality and the higher number of days in the month (average daily traffic rose 13.7%). As a result, in December of 2009, GOL registered a total load factor of 76.3%. The load factor was 77.1% in the domestic market and 70.3% in the international market. The load factor in the international market was 21.4 percentage points higher than the 48.9% posted in December 2008, and 5.7 p.p. higher than the 64.6% in November 2009.

GOL has been maintaining its disciplined strategy of expanding capacity in order to maximize its operating income. In December, the company expanded its domestic capacity by 19.3%, while demandincreased by 36.2%. This strategy was clearly more effective in the international market, where GOL contracted its capacity by 13.9%, while demand increased by 23.9%. As a result of the gradual recovery in yields following the scenario of increased price competition, net yield showed recovery once again in December, reaching slightly more than R$19.00 cents. This brought the net yield to approximately R$18.00 cents in the fourth quarter of 2009 and to just above R$20.00 cents in the whole of 2009.