CHICAGO, TOKYO and HOUSTON – The trans-Pacific joint venture – the first of its kind between the U.S. and Asia – also would enable United, ANA and Continental to compete more effectively with other global alliances, each of which has a significant presence in Tokyo.

Upon DOT approval of the companies‘ immunity application, United, ANA and Continental will be able to jointly manage trans-Pacific activities including scheduling, pricing and sales, offering customers a greater selection of routings and a wider range of fare and service options.

„This joint venture, coupled with the recently announced open skies agreement between the U.S. and Japan, will significantly enhance our ability to serve customers in Japan and throughout Asia and offer new choice and convenience for customers,“ said Glenn Tilton, United’s chairman and chief executive officer.

„By making this closer cooperation between our partner airlines, we will be able to strengthen our trans-Pacific network and improve our services,“ said Shinichiro Ito, President and CEO of ANA. „We are looking forward for our application to be approved, which will create greater convenience for our valued customers,“ he added.

„Our network of service to nine Japanese cities will be enhanced by giving our customers more options for using our flights in conjunction with United and ANA for trips both within the region as well as on trans-Pacific routes,“ said Larry Kellner, Continental’s chairman and chief executive officer.

The Department of Transportation granted antitrust immunity to United and Continental in July 2009, enabling the two carriers to coordinate schedules and fares for services outside the United States. 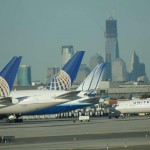