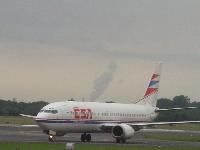 
The tender for the purchase of the Czech Airlines Duty Free independent business unit was won by a member of the international group Lagardére Services, Aelia Czech Republic.

Prague – The outcome of the tender, as well as the contractual conditions of the transaction, was approved by the Czech Airlines General Meeting. At its extraordinary session held yesterday, the General Meeting also confirmed Czech Airlines’ plan to hive off the activities related to aircraft and passenger handling into a separate company.

Three companies participated in the final round of the tender for the purchase of Duty Free, including in-flight sales. In a fax auction where price was the decisive factor, the best conditions were offered by Aelia – in the amount of CZK 764,000,000.

“The overall price exceeded our expectations. The participation of high-quality bidders is the asset of any tender and a guarantee of a good price. This was confirmed in this case, as well,” said Czech Airlines’ President, Miroslav Dvořák, in that context, adding: “I am pleased that the winner is a partner who has extensive experience with the operation of Duty Free and for whom these activities constitute the main line of business. Czech Airlines will get a financial amount that will significantly strengthen it. The proceeds of the sale will be used in full for the implementation of further stabilisation measures.  Czech Airlines will also be able to better focus on its own core business, i.e., air carriage.”

Aelia Czech Republic is a joint venture of the Aelia Group and HDS Retail Czech Republic. Both entities are members of the Lagardere Services group, one of the world’s leaders specialised in sales in transport zones. “Winning this tender will strengthen our position on the European market, especially in central Europe,” said Richard Kalhous, General Manager of HDS Retail Czech Republic, adding: “I would like to thank all of the employees and consultants of Czech Airlines who participated in the process, for their highly professional approach and cooperation.”

The projects of selling Duty Free and hiving off handling (the activities related to aircraft and passenger handling, into a wholly owned subsidiary constitute components of the plan for the long-term stabilisation of Czech Airlines. Other measures include the previously announced sale of the airline’s administrative building, APC, to Prague Airport.  This plan was confirmed last week by Czech Airlines’ Supervisory Board.

Czech Airlines – In 2008, Czech Airlines carried 5.6 million passengers.  Since 2001, the airline has been a member of SkyTeam, one of the leading global airline alliances.  Czech Airlines currently offers connections to 129 destinations in 44 countries worldwide. The fleet comprises 50 aircraft – ATR 42s/72s, Boeing 737s, and Airbus A310/A319/A320/A321s.  In 2008, Czech Airlines ranked third in on-time flight performance, among the 27 member airlines of the Association of European Airlines (AEA).

For the last six years, Czech Airlines has been selected as the “Best Airline Based in Central/Eastern Europe – 2004, 2005, 2006, 2007, 2008 and 2009”. This title is awarded annually by the Official Airline Guide (OAG) and is based on the votes of frequent business travellers.

In 2009, the Airline also won the “Best Airline in Central Europe” award, bestowed annually by the independent British organisation Skytrax, as a part of The World Airline Awards ranking, based on the votes of millions of passengers from all over the world. On the basis of the results of an annual readers’ survey, the American magazine Business Traveler named Czech Airlines as the “Best Airline in Central and Eastern Europe”, for the second time in 2008. Czech Airlines was also on the shortlist of the eight best world airlines in 2005.