2 new Airbus aircraft, “Cleisthenes” and “Phidias”, take the New Acropolis Museum and Greece on a journey around the world 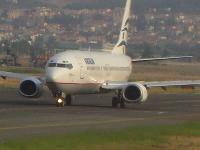 2 new Airbus aircraft, “Cleisthenes” and “Phidias”, take the New Acropolis Museum and Greece on a journey around the world

Athens –  In particular, the two new Airbus Α320 aircraft bearing the image of the Acropolis Museum’s Kori of Athens were presented during an event held at the company’s technical headquarters. The inscription urges us to “Discover the New Acropolis Museum”, not to mention the Museum’s website at www.theacropolismuseum.gr. “Cleisthenes” and “Pheidias” become a live invitation to the New Acropolis Museum for millions of passengers throughout the world. They will be calling us on a tour through civilization, at each and every destination, at each and every airport.

These two airplanes however are not the only “vehicles” promoting the Museum and Greece. From the beginning of 2010 onwards, a special video that will be provided by the Museum will be broadcast aboard all 22 brand new Airbus aircraft owned by AEGEAN during all international flights. The video will introduce the newest jewel of Greece and Athens to travelers, let alone arouse their interest and encourage a visit.

The names “Cleisthenes” and “Pheidias” assigned to the aircraft were recommended by the Director of the Acropolis Museum, Professor Dimitris Pantermalis.

The Chairman of Aegean Airlines, Mr. Theodoros Vassilakis, stated during his speech: “We are fully aware of our responsibility seeing as we are the largest Greek airline. It is imperative that we bond ancient Greece’s contribution to modern civilization with a creation of contemporary Greece that we must convey to the international community. The New Acropolis Museum is our gaze upon the world and embraces both of the country’s historic and contemporary image. That is exactly the face of Greece we must promote, not only to attract visitors, but also to restore our sense of pride within.”

The Director of the Acropolis Museum, Professor Dimitris Pantermalis, commented among other things: “I was extremely pleased when the administration of Aegean adopted the two names, which mean so much to us, to the Museum, and also reflect the works exhibited within the Museum. Cleisthenes is credited with being the first man in history who wanted to reform political life in Athens, thus providing what we know and demand today, isonomy (as per the Greek word isonomia, meaning “equality before the law”), in other words democracy, as it was expressed soon after. The new perception of man, men’s rights, men’s freedom, men’s ability to plan their own lives, these are all political messages that were converted into art by Phidias, hence our second name. He managed to take the ideology as a whole inherent in classical Athens and turn it into an image.”