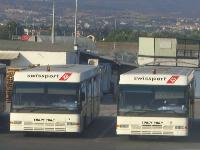 
Swissport International, the world’s leading aviation services company, has been awarded a ground handling licence for Munich Airport. Swissport and its local joint-venture partner Losch Airport Service won the corresponding tender process against various well-known competitors. The seven-year licence will enable Swissport/Losch to provide ramp (apron) services at the airport. These operations have now been scheduled to commence on 1 March 2010.

Zurich/Stuttgart – The new ground handling licence for Munich attracted sizeable interest: the airport is a key transport hub, and the awarding of such licences in Europe is a far-from-everyday event. With local market leader FMG already established at the airport, this second licence was put to international tender. The proposed collaboration between Swissport (with its global expertise) and Losch Airport Service (with its strong local roots) proved the most attractive offer, and earned the partners the licence.

“It’s the first time Swissport has been awarded with a ramp licence in Germany what we consider as a major step ahead in the German market,” says Per Utnegaard, President and CEO of Swissport International. “And we’re greatly looking forward to further developing our customer relations with all Airlines at Munich Airport, the 2nd biggest Hub in Germany.”

Losch Airport Service has been active in the airport sector for several years now: its workforce of over 500 personnel already provides ground handling services at five German airports. “I am delighted at this licence award,” says CEO Marc Losch. “And I’m convinced that, working with Swissport, we can offer truly excellent ground handling services for Munich Airport and the airlines that serve it.”

Adrian Melliger, Swissport’s Senior Vice President Switzerland & Germany, is equally enthusiastic. “Munich is an investment in the future for us, too, and one where we expect to see attractive growth in the longer term,” he explains. “The airport handled over 34 million passengers and some 400 000 aircraft movements last year,” Melliger continues. “And I have every confidence that Swissport/Losch will be able to establish itself in this market and offer the airport’s airlines an attractive new ground handling option.”

All the operational and commercial aspects of the new services – processes, structures, customer agreements, personnel, infrastructure, equipment and so on – will be finalised over the next few weeks with a view to starting operations as planned on 1 March 2010. Swissport/ Losch look forward to the challenge of making their own quality mark at Germany’s second-biggest hub. Further information on their progress here will be provided as soon as possible.