OPENING OF THE NEW MELIÁ VALENCIA, OFFICIAL HOTEL OF THE VALENCIA TENNIS OPEN 2009 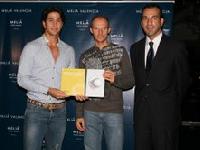 OPENING OF THE NEW MELIÁ VALENCIA, OFFICIAL HOTEL OF THE VALENCIA TENNIS OPEN 2009


Sol Meliá renews its portfolio in the city of Valencia with a new hotel right next to the City of the Arts & Sciences. Meliá was joined at the presentation by the tennis players Fernando Verdasco and Nikolái Davydenko, both “very excited” by the hotel.

Palma de Mallora – Yesterday the hotel company Sol Meliá officially presented the new Meliá Valencia, the new flagship hotel for the leading Spanish hotel chain in the city of Valencia and a fine example of the new breed of Meliá Hotels, full of luxury, avant-garde design and modernity.

With almost 25,000 rooms in more than 90 hotels in 22 countries, Meliá Hotels, doyen of the Spanish hotel industry, has renovated the brand’s finest hotels in the most privileged locations in major cities and popular resorts, and is showing its new face in Valencia today with a hotel along the new Valencian “golden mile”, next to the City of the Arts & Sciences, in the commercial heart of the city and very near the port used for the America’s Cup and the Formula 1 urban racetrack.

The new Meliá is a synthesis of the travel experience of the most contemporary and discerning traveller: modern design within classical or stunning architecture, service quality standards adapted to the needs of the 21st century traveller, Spas, event rooms, new technologies, the finest cuisine, “à la carte” mattresses and pillows, and music and aromas to stimulate our five senses.

The 262 comfortable and spacious rooms on 8 floors are fully equipped with all of the services and facilities that guests may desire. As a hotel that is ideal for both business and leisure travellers, the Meliá Valencia also provides meeting and banqueting facilities consisting of 5 event rooms with capacity for up to 250 guests, all full of light and equipped with the latest modern technology to ensure that every event is a success. Another feature which makes the Meliá Valencia so special is the presence of a number of works of art by the prestigious Valencian artist Toni Miró throughout the hotel.

The hotel also provides a full Yhi Spa, a wellness brand and philosophy operated by Sol Meliá, and has also made the greatest efforts to provide superior quality cuisine, plain to see in the Menorca XXIII restaurant with its innovative Valencian dishes.

The presentation was attended by the tennis players Fernando Verdasco and Nikolái Davydenko, both of whom expressed their satisfaction with their cooperation with Sol Meliá over the last two years and also their admiration for the new Meliá Valencia, official host for the tennis stars visiting Valencia for the tennis open tournament. The Director for Meliá worldwide, Daniel Lozano, thanked the players for their participation and their affection towards Meliá, and also mentioned the importance of integrating hotels within everyday life in the city, something “particularly important in a city such as Valencia where there is so much going on: Formula 1, America’s Cup, golf, culture, the opera…all just a short distance from this excellent hotel”.

The 4 star hotel aims to become a point of reference for the hotel industry in Valencia and for the social scene in the city. It has been added to the Meliá portfolio at the same time as the Meliá Reconquista in Oviedo, the Meliá Bilbao, the Meliá Düsseldorf and the Meliá Luxembourg, demonstrating the fact that the leading Spanish hotel company continues with its commitment to consistent yet ambitious growth, designed to ensure Meliá remains a point of reference in the Spanish and international hotel industry.