THE ONLY EUROPEAN DESTINATION TO RECORD GROWTH? SERBIA

Serbia has managed to lure tourists even in the time of crisis. It is partly thanks to the advertising campaign abroad. Nevertheless, the tourism revenue has dropped even here.

Serbia boasts that it is the only European country witnessing growth in tourism arrivals. This Balkan state that has recently drawn attention because of the separatists in Kosovo has seen a 4 per cent growth since the beginning of this year when compared to the year 2008 according to the Secretary of State for Tourism, Goran Petković. The secretary claims other European countries like for example Austria or the Czech Republic have recorded a significant decline in the numbers of incoming tourists. For instance, the Serbian neighbor, Bulgaria recorded a 12.7 per cent decline this June compared to the same period in 2008. The number of visitors to Serbia has risen but the amount of money they have spent here has dropped 13 per cent compared to the last year. Mr. Petković sees the success of his country as a tourism destination partly because of their advertising campaign in other countries. The National Tourist Organisation of Serbia (TOS) launched a $500,000 promotional campaign on CNN in 2007. They also regularly present Serbia at various international European tourism fairs. Serbian capital has even made it to the British daily the Guardian. Garth Cartwright described it as an ideal spot for clubbers since every night a visitor may party in here at such locations as old fortresses or on boats. There are numerous possibilities and numerous music styles available in Belgrade. Another thing that helped to draw attention of tourists is the Davolja Varos. This rock formation consisting of over 200 spindle-shaped pillars was the Serbian nominee for the New 7 World Wonders of Nature contest. It has failed to reach the list of finalists but it has managed to lure more tourists anyway. In 2007 only 3,000 tourists visited the site whereas 60,000 of them came in 2008According to the director of TOS, Gordana Plamenac, Europeans are more interested in closer destinations and Serbia still remains somehow undiscovered part of their own continent. 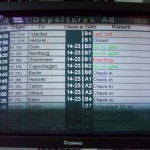 Air Baltic to Offer Flights to Bucharest in Cooperation with TAROM 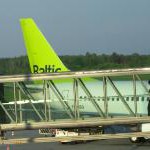 AirBaltic to Offer Summer Flights to Belgrade, Madrid and Vaasa

The Latvian national airline airBaltic will supplement its routes during the summer season of 2010 by adding flights from Riga to three new destinations – Belgrade in Serbia, Madrid in Spain, and Vaasa in Finland. Flights to Belgrade will begin on May 5, to Madrid on June 2, and to Vaasa on March 29.

In the international market demand growth was 13%, with load factor increase of 3.7 p.p.