HOUSTON – Continental Airlines (NYSE: CAL) recently announced a summer promotional $59 one-way fare for US Helicopter service between its New York hub at Newark Liberty International Airport and Manhattan. The discounted fare is available for all fare types on both domestic and international itineraries for a limited time.

In addition, Continental continues to offer complimentary helicopter service between Liberty and Manhattan to customers traveling on select fares in its BusinessFirst cabin on international routes.

The special fare is effective immediately for tickets purchased on or after Aug. 10, 2009 for travel through Sept. 30, 2009. Customers previously ticketed to travel within these dates may add the US Helicopter service at the discounted fare. No advance purchase is required. The promotional fare does not include passenger facility charges of up to $18 per segment, Sept. 11 security fee of up to $5 each way, Federal segment tax of $3.60 per segment or 7.5% U.S. Transportation Tax. For reservations or additional information go to continental.com or call 1-800-523-FARE.

US Helicopter flights operate hourly, Monday through Friday from 1:15 p.m. to 7:40 p.m., connecting Continental’s Terminal C at Liberty to the Downtown Manhattan Heliport near Wall Street and the East 34th Street Heliport in Midtown Manhattan with an eight-minute travel time.

US Helicopter customers receive TSA security clearance at the New York heliports before departure and arrive at Gate C-71 inside the secure area at Liberty. The service also provides convenient check-in, with boarding passes and baggage check to the final destination. More information on US Helicopter is available at www.flyush.com.

Continental Airlines is the world’s fifth largest airline. Continental, together with Continental Express and Continental Connection, has more than 2,750 daily departures throughout the Americas, Europe and Asia, serving 133 domestic and 132 international destinations. More than 750 additional points are served via current alliance partners. With more than 43,000 employees, Continental has hubs serving New York, Houston, Cleveland and Guam, and together with its regional partners, carries approximately 63 million passengers per year. 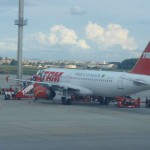 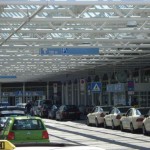