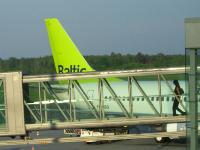 
Latvian airline airBaltic carried overall 296,754 passengers in July 2009 (from Riga and Vilnius), representing 5% more than in the same month in 2008, when airBaltic transported 283,555 passengers. In July of this year, the number of passengers at the base of airBaltic in Riga has increased by 31% compared to the same period last year.

The 15-minute flight punctuality indicator for airBaltic was at a level of 87.9% in July 2009. This means that almost 88 of every 100 airBaltic flights in July departed at the planned time or with a delay of no more than 15 minutes.