São Paulo – Air Canada, a founding member of Star Alliance and we, today announced that will start implementing a bilateral agreement that will allow members of TAM Fidelidade or Air Canada’s Aeroplan programs to earn and redeem frequent flyer points/Miles beginning April 28, 2009 on flights operated by either company. This initiative is part of a Memorandum of Understanding signed between Air Canada and us in June 2008, aiming to expand services offered to customers of both airlines.

Paulo Castello Branco, our vice president, Commercial and Planning, states that the agreement will bring immediate benefits to passengers of both airlines. „The partnership of both frequent flyer programs – TAM Fidelidade and Aeroplan – enhances our strategy of Excellence in Services, one of the three pillars that sustain our operations, the other two being Technical and Operational Excellence and Excellence in Management,“ says Castello Branco.

A pioneer in the adoption of a Frequent Flyer Program for airlines in Brazil, called Programa Fidelidade, we have now over 5.5 million members, with more than 7.4 million tickets distributed through the redemption of accrued points.

Air Canada and we have had a codeshare agreement since October 2008, allowing us to sell seats in flights operated by Air Canada between Sao Paulo and Toronto, with the possibility of connections to a number of Canadian cities. Air Canada in turn can offer its customers a number of flight options to Brazilian destination operated by us. With this partnership agreement, customers of both airlines will benefit from seamless connections on a single ticket and baggage check-through to final destination. 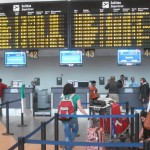