Etihad Airways, the national airline of the United Arab Emirates, is set to boost its flying programme to Europe with the addition of a major new route to Athens. Direct flights to the Greek capital city will start at the beginning of June 2009.

Etihad’s latest destination will bring the Abu Dhabi-based airline’s global flight network to 53 cities, supplementing services to Melbourne in Australia due to be launched in March 2009.

The Greek capital of Athens will initially be served non-stop, three times a week from early June, increasing to five services a week from October 2009 and then daily from the start of 2010.

James Hogan, Etihad Airways’ chief executive, said: „The launch of flights to Athens illustrates Etihad’s ambitions to boost its European network and link key strategic cities of the world through our Abu Dhabi home base. We anticipate strong demand for flights to and from Athens which will help open up new commercial and cultural ties between the UAE and Greece.

„The new route also offers excellent connecting opportunities between Athens and the rest of our growing network, helping to link this historic European city with Greek communities worldwide.“

The addition of Athens will bring to 12 the number of European destinations served by Etihad.

Athens, with a population of nearly three quarters of a million people, is one of the world’s oldest cities with a recorded history which spans more than 3,000 years. The city, as well as the surrounding islands, is a top European holiday destination with traffic expected from across the Etihad network, particularly Australia which has a strong Greek community.

Etihad will operate a two-class Airbus A320 to Athens, configured to carry 140 passengers with 20 seats in business class and 120 in economy class. 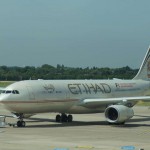