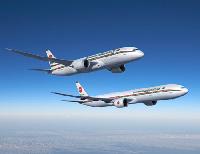 
Biman Bangladesh Airlines and Boeing [NYSE: BA] announced the airline’s order for four 777-300ER (Extended Range) and four 787-8 Dreamliner airplanes at a signing ceremony in Dhaka, the capital of Bangladesh.

Biman Bangladesh Airlines, which began as a government-owned national carrier in 1972, became Bangladesh’s largest public limited company in 2007. The order for new Boeing airplanes represents a major step forward in the airline’s reorganization and growth plans. The airline also has purchase rights for four 777s and four 787s.

„Clearly, Biman needs modern, fuel-efficient and reliable airplanes to move forward with our expansion and better serve our country’s growing travel needs,“ said Dr. M. A. Momen, Biman’s managing director. „Our competitive assessment of both the 777-300ER and the 787-8 Dreamliner was extensive and has led to our making the very best decision based on our own defined operational parameters. We have selected the best airplanes to fulfill our mission requirements – and that mission is the continued growth and success of Biman Bangladesh Airlines.“

Biman currently connects Bangladesh with 18 countries around the world, and has agreements in place that will allow it to serve a total of 42 countries as it implements its growth plan.

„It’s always rewarding for us to work directly with an airline on a plan for success,“ said Marty Bentrott, Boeing Commercial Airplanes vice president of Sales for the Middle East and Africa. „The 777-300ER and 787-8 provide seamless operational compatibility that will offer Biman greater flexibility and more opportunity to institute route planning and fleet operations that have a positive impact to its bottom line.“

The 777 family of airplanes is the market leader in the 300-to-400-seat segment. The 777 is preferred by airlines around the world because of its fuel efficiency, reliability and spacious passenger cabin. The 777-300ER is the world’s largest long-range twin-engine jetliner, capable of carrying 365 passengers up to 7,930 nautical miles (14,685 kilometers). The 777-300ER and the 777-200LR are two new, longer-range 777 models that Boeing introduced to offer airlines additional flexibility in serving the nonstop routes that passengers demand. To date, Boeing has received 1,074 orders for the 777 from 56 customers worldwide.

The 787 Dreamliner offers passengers a better flying experience and provides airline operators greater efficiency to better serve the point-to-point routes and additional frequencies passengers prefer. The technologically advanced 787 will use 20 percent less fuel than today’s airplanes of comparable size, provide airlines with up to 45 percent more cargo revenue capacity and present passengers with innovations including a new interior environment with cleaner air, larger windows, more stowage space, improved lighting and other passenger-preferred conveniences. To date, Boeing has received nearly 900 orders for the 787 Dreamliner from more than 55 customers worldwide.