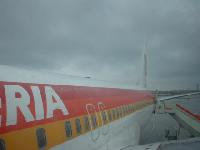 Iberia closed 2007 with net earnings of 327.6 million euros, making it one of the best years in company history. Pre-tax profits came to 446.4 million euros, 170.3% above those of 2006. This performance gave the Spanish airline its twelfth consecutive profitable year.

The EBITDAR for the full year came to 932 million euros, for a gain of nearly 18% against 2006. The margin of EBITDAR over income reached almost 16.9%, 2.2 points higher than the previous year.

Operating income rose by 2.5% to 5.52 billion euros. Passenger and freight income supplied 84% of this amount, or 4.62 billion euros. Income from maintenance services for third customers rose by almost 25% to 273.6 million euros.

Despite successive fuel price hikes in 2007, operating costs eased by 0.5% to 5.238 billion. The unit cost per ASK (available seat kilometre) was also 1.5% lower, thanks to cost-cutting policies in the multi-year strategic plan, and the depreciation of the U.S. dollar.

The end-year balance sheet for the Iberia Group was very robust, with a net negative debt of 2.5 billion euros, a 45% increase in twelve months, and a cash position (cash plus temporary financial investments) of more than 2.93 billion

Iberia shares rose by 8.7% for the year, and the company was the sole airline among its European competitors to post gains in the stock market last year. Since Iberia shares were first listed in April, 2001, until the close of 2007, they appreciated in value by 152.1%.

In 2007 Iberia flew 4.2 million passengers on its intercontinental routes, an increase of 8.1%. In terms of cabin occupancy, the load factor on long-haul flights rose by 1.6 points to 87.2%, a new record for Iberia. At the same time, the company’s pre-eminent market share of Europe-Latin America routes rose by nearly a full point to 19.9%, and in the business class segment its share grew by 3.6 points in the year.

In keeping with the objectives set in the 2006-2008 strategic plan, Iberia continued to restructure its short- and medium-haul route network, while beefing up its long-haul services, adding 6.8% in ASK (seat-kilometres supply).

On all routes, the company carried 26.9 million passengers, and the load factor rose by 1.8 points to 81.6%, a new company record, and the best performance of any major European airline in the year. The number of RPKs (Revenue passenger-kilometres) climbed 3.3% higher, while ASKs rose by only 1%. A good part of this increase was due to the launch of new direct services to Algiers, Bucharest, Boston, Washington, St. Petersburg, Prague, and Warsaw during the year.

Iberia’s October-December operating earnings reached 74 million euros, a gain of 26 million or 53% from the figure posted in the same quarter of 2006.

The unit operating margin per ASK was also impressive. At 44 eurocents per seat-kilometre it was three times higher than a year ago.

Today, Iberia is Spain’s leading airline and also leader on routes linking Europe with Latin America. It posted an operating income of about 5.4 billion euros, net earnings of 116.1 million euros and an Ebitdar of 790.5 million euros in 2006. It is also distinguished by its commitment to socially and environmentally responsible conduct. Along with its franchise partner Iberia Regional, Iberia operates some 1,000 flights each day to about 100 different destinations. Last year, Iberia carried a total of 33 million passengers. It is a member of the oneworld airline alliance, along with American Airlines, British Airways, Cathay Pacific, Finnair, JAL, LAN, Malev, Qantas and Royal Jordanian.