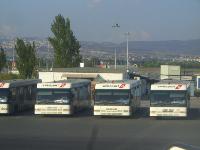 
Swissport International is further expanding its network: the world’s biggest provider of ground services to the aviation industry has obtained the licences (for a period of 7 years) to provide ground services at Larnaca and Paphos airports on Cyprus, together with its partners G.A.P. Vassilopoulos and Cyprus Airways.

Zurich/Larnaca –  The new operations are scheduled to commence on May 15. Swissport continues to expand. The world’s leading provider of airport ground handling services will soon be adding two new stations on Cyprus to its global operating network. The island is a leading tourist destination that receives over ten million air travellers a year. Around 40 per cent of the flights concerned are charter services, while the remaining 60 per cent are scheduled services operated by various international airlines.

Swissport is now teaming up with two strong local partners – G.A.P. Vassilopoulos and Cyprus Airways – to enter the Cyprus
ground handling market, share in the recent substantial growth in travel volumes and position itself as the island’s leading ground
services provider. The requisite licences were obtained through an international tender process under which airport authority Hermes
Airports Ltd. has enabled two providers to benefit from the liberalisation of the local ground handling market. The total
market volume for these two Airports is in the range of some 20’000 flights a year.

The G.A.P. Vassilopoulos Group is already well known to Swissport: the partners have been collaborating since 2005 under
a joint venture offering ground handling services in the executive aviation sector together with certain GSA and ticketing functions.
G.A.P. Vassilopoulos is a stock exchange-listed firm that is active in the cargo, shipping, hotel and insurance sectors. The company
has earned itself a particularly impressive reputation in logistics and tourism, and is greatly looking forward to these new
partnership activities.

With home carrier Cyprus Airways as its third member, the new partnership has even brighter prospects of success. While
Swissport, as the industry leader, brings its professional ground handling expertise and its extensive international contacts to the
venture, G.A.P. Vassilopoulos and Cyprus Airways will contribute their strong local roots.

The new ground handling operations are scheduled to commence at both Larnaca and Paphos airports on May 15, in good time for
the peak tourist season. The new operation will be headed by Christian Draeger, who will perform this function in parallel to his
duties as CEO of Swissport Bulgaria; and its Chief Operating Officer will be Chris Christopoulos, who joins the local
management team from Swissport Corporate Development.

Juan Jose Andres Alvez, Senior Vice President and Head of Swissport’s European Ground Handling unit is delighted about
this important decision: “ We are very happy about the ground handling liberalization process in Cyprus as well as with the
strong partnership, allowing us to further strengthen our position in the South Eastern European market. This important step will
enable our customer Airlines to get an excellent and competitive ground handling service for the upcoming summer period.”