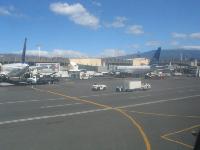 
Ideal aircraft for short and medium distance routes from Liberty

NEW YORK — Continental Airlines (NYSE: CAL) begins service today with a new type of regional aircraft from its New York hub at Newark Liberty International Airport. The efficient, quiet and comfortable 74-seat Bombardier Q400 will allow Continental to increase seat capacity at its Newark hub without adding more flights. The Q400 is an ideal aircraft to operate at Liberty as it will allow more extensive use of alternate approach and departure routes and will enable flight operations at lower altitudes.

„Our selection of the Q400 aircraft is an important move for us because it addresses our need for efficiency without sacrificing our customers‘ comfort, and because it is well-suited to the unique operating environment at Newark Liberty,“ said Mark Erwin, Continental’s senior vice president of corporate development.

Colgan Air Inc., a subsidiary of Pinnacle Airlines Corp., will operate the flights as Continental Connection on short and medium-distance routes from Liberty. The first cities to be served by Continental from New York using the Q400 are Albany, Baltimore, Pittsburgh and Rochester. Additional service from New York and Cleveland will be added throughout 2008.

Manufactured by Bombardier Aerospace, the Q400 is a high-efficiency, modern-technology turboprop, which will be configured with 74 seats in a single cabin. With a maximum cruise speed of 440 mph, the Q400 can keep pace with traffic flows in and out of busy metropolitan airports like Newark Liberty. Passenger comfort will be enhanced by the Q400’s state-of-the-art noise and vibration suppression system.

Continental has entered into a 10-year capacity-purchase agreement with Pinnacle Airlines Corp. The company will acquire 15 new Q400 aircraft which it will operate through its Colgan subsidiary. Continental will schedule and market the service.