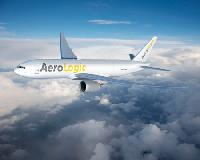 Valued at $2 billion at list prices, the eight 777 Freighters were ordered by Avion Group of Iceland in 2005. Avion Group terminated its order and the airplanes were picked up by Deucalion in late 2007.

Deucalion will lease the freighters to AeroLogic, the joint venture first announced by Lufthansa Cargo and DHL Express last year, for cargo services on European-Asian routes. AeroLogic will operate out of Leipzig, Germany.

„The 777 Freighter’s twin-engine fuel efficiency, low noise and overall capability are perfectly suited for our new cargo service out of Leipzig,“ said AeroLogic Managing Director Dr. Thomas Papke. „Its combination of long range and maximum payload make it a highly economical and profitable freighter. I can’t imagine another freighter that would work as well as the 777 Freighter in meeting our demanding environmental and performance targets.“

The 777 Freighter will be capable of flying 4,885 nautical miles (9,045 kilometers) with a full payload, making it the world’s longest-range freighter. With the lowest trip cost of any large freighter and excellent ton-mile economics, the 777 Freighter will build on the 777 family’s demonstrated success in delivering lower fuel consumption, maintenance costs and operating costs than other airplanes in its class.

„As one of the newest members of the Boeing family of freighters, the 777 Freighter is a symbol of our commitment to offering customers the most capable and efficient freighters in the world,“ said Marlin Dailey, vice president of Sales for Europe, Russia and Central Asia, Boeing Commercial Airplanes. „With a record 83 orders for freighters in 2007, our freighter family is recognized by customers around the world as offering superior performance. I look forward to our partnership with AeroLogic as the 777 Freighter becomes a cornerstone of its success.“

AeroLogic GmbH is jointly owned by DHL Express and Lufthansa Cargo AG, with each company holding a 50 percent stake. The airline, which was founded in September 2007 and is based in Leipzig/Schkeuditz, developed from the joint venture set up by the two partners in 2004. The company currently has about 20 employees. In all, AeroLogic is expected to generate about 250 new jobs, roughly 200 of which will be for cockpit crew. By 2012, the AeroLogic fleet will encompass eleven leased Boeing 777-200Fs, the first four of which are scheduled for delivery at the beginning of 2009. AeroLogic’s cargo capacities will mainly be used by DHL Express and Lufthansa Cargo. The two partners will also be responsible for sales and warehouse handling. Operations are being planned around both partners‘ requirements: on weekdays, freighters will fly to Asian destinations in the express network operated by DHL Express. At weekends, they will supplement Lufthansa Cargo’s services. For customers of the parent companies, AeroLogic will mean more capacity, more flexibility, an expanded network and improved operating times. 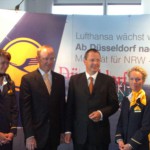 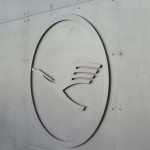