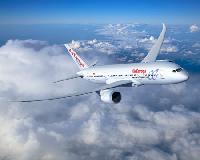 
Boeing [NYSE: BA] and Spanish carrier Air Europa announced an order for eight Boeing 787-8 Dreamliners valued at $1.3 billion at list prices. The order, placed by Air Europa in 2007, previously was accounted for on Boeing’s Orders & Deliveries Web site as an unidentified customer.

Air Europa, based in Palma de Mallorca, is the first Spanish customer for the 787 and will be the first carrier in Spain to offer passengers the unprecedented comfort of the 787 cabin interior while also being the first to reduce emissions by 20 percent with the 787’s ultra fuel-efficient carbon-composite design and all-new engines.

„The 787 is the best solution that meets our requirements for a superior airplane that offers better efficiency, better environmental performance and excellent comfort for our passengers,“ said María José Hidalgo, managing director of Air Europa. „After further development of the 787 by Boeing, it became very clear to our pilots, our fleet planners and our accountants that the 787 would deliver the best economics while also offering superior satisfaction for our passengers. We look forward to making history as the first Spanish airline to fly this magnificent machine.“

Air Europa plans to operate the 787 on its long-haul routes to destinations such as Argentina, Mexico and the Dominican Republic.

„This decision would not have been possible without Air Europa’s exhaustive review of the 787’s performance and the strong record of success and partnership that Boeing shares with Air Europa,“ said Marlin Dailey, vice president of Sales for Europe, Russia and Central Asia, Boeing Commercial Airplanes. „Air Europa’s fleet of Next-Generation 737s has been tremendously successful. We look forward to continuing that record of performance with the 787.“

Since its launch in April 2004, the 787 has become the world’s fastest-selling commercial airplane. Fifty-six customers worldwide have placed 857 orders for the 787, preferring its superior efficiency, environmental features, economics, range and passenger comfort.

Air Europa has selected the Rolls-Royce Trent 1000 engine to power its 787s.

The technologically advanced 787 Dreamliner will use 20 percent less fuel than today’s airplanes of comparable size, provide airlines with up to 45 percent more cargo revenue capacity, and present passengers with innovations including a new interior environment with higher humidity, wider seats and aisles, larger windows, and other conveniences.

The 787’s long range allows carriers to offer its passengers the point-to-point service they prefer, bypassing inconvenient connections at crowded hub airports. The 787’s first flight is scheduled for around the end of the second quarter of 2008. Deliveries are expected to begin in early 2009.

Air Europa, founded in 1986, is the air travel division of Globalia Corporacion. Since 1991, Air Europa has focused on becoming one of the leading airlines in Europe. Air Europa operates a fleet of 38 Boeing airplanes on a network that includes most of the Spanish territory, European and North-African routes including Paris, Milan, Rome, Warsaw, Prague, Budapest, Tunis and Marrakech, as well as transatlantic destinations such as Argentina, Brazil, MÃ©xico, Venezuela and the Dominican Republic. As part of an effort to provide more comfortable and global service to customers, Air Europa recently joined the SkyTeam alliance as an associate member and has collaboration agreements with other airlines including Aeropostal, Malev, Portugalia and Tunisair. 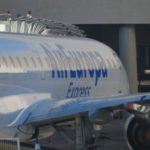 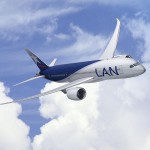