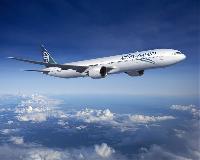 The study conducted by the independent aviation research company, and funded by Boeing, used published data to calculate the fuel consumption of flying a fleet of 179 767-200ER and Airbus 330-200 airplanes over a 40-year service life. The purpose of the analysis was to provide a clear comparison between the KC-767 Advanced Tanker (AT), based on the 767, and its major competitor in the U.S. Air Force’s KC-135 Tanker Replacement Program. The winner of the KC-X competition will begin recapitalizing the service’s aging refueling inventory by building 179 next-generation tankers.

The study showed that the 767 fleet burned 24 percent less fuel than the A-330s and would save approximately $14.6 billion in fuel costs. That number is significant since the Air Force spent approximately $6.6 billion on aviation fuel costs in 2006.

„Senior Air Force leaders have said that when a barrel of oil increases by $10, it costs them about $600 million a year,“ said Mark McGraw, vice president, Boeing Tanker Programs. „So it is critical, especially with rising fuel prices, that the Air Force’s next refueling tanker meet or exceed their requirements and be as efficient as possible. That aircraft is the right-sized KC-767 Advanced Tanker.“

Boeing recently submitted its Final Proposal Revision and is offering an advanced derivative of the future 767-200 Long Range Freighter. The modern aircraft will have a 767-200ER fuselage; 767-300F freighter wing, landing gear, cargo door and floor; and a 767-400ER flight deck and flaps.

The KC-767AT will provide critical fuel to receiver aircraft closer to the fight while requiring fewer bases to support tanker operations. It also will carry three times more cargo and passengers than the KC-135 without sacrificing the operational flexibility delivered by a medium-sized aircraft.

Boeing will produce the KC-767 Advanced Tanker at its facilities in Everett, Wash., on the existing commercial line where more than 950 highly reliable and maintainable 767s have been built. Installation of military refueling systems and flight test activities will take place at the company’s finishing center in Wichita, Kan.

For a copy of the Conklin & de Decker fuel study, visit www.globaltanker.com.