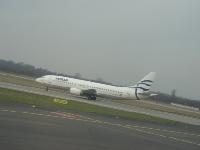 ‘I am pleased to report a positive set of 9-month results, showing net profits of €33.4m, 45% higher compared to the respective 2006 period. These improved results were driven by a consistent strong momentum in passenger traffic growth combined with successful cost efficiency measures.

I am also pleased to report progress on areas that have been set as key priorities on our strategic development plan and these include growing our international network, further strengthening of our relationship with Lufthansa, reinforcing our domestic position and last but not least achieve progress on the cost of distribution front.

Looking forward into 2008, where the major part of our fleet modernization would take place, we are focusing on the improved customer services as well as on further cost efficiencies that the renewal will bring, in an overall challenging cost environment. The oil price, which has repeatedly hit and exceeded record high levels, has become the most immediate challenge for the near future. While partially mitigated by the weak US dollar and the application of fuel surcharges, we believe its effect will be felt in 2008. To this end, among our goals is to accelerate the re-fleeting process – to the degree possible – so as to more rapidly improve the fuel efficiency of our fleet as well as enhance our revenue potential as a result of our improved services.’

Aegean Airlines at a glance

Total revenue rose by 20% to €370.5mfrom €307.6m attributed to strong demand trend, on a flying program 27% larger in ASKs. Growth was mainly driven by scheduled services revenue that grew 23% to €282.5m, accounting for 84% of total revenues (excluding airport taxes). Trends for the company’s key revenue performance indicators were aligned with trends evident up until June 2007 and within management’s expectations. Passenger yield for the 9-month period was down 4% to €13.2 cents while revenue per available seat kilometer (RASK) eased 5% to €9.4 cents, reflecting a combination of drivers like the recent new route openings, a longer stage length, a relatively weak yield environment prevailing on Western European routes and higher web sales contribution. Average fare edged 2% higher, reflecting the rising contribution of the international network travelers and the 8% rise in average stage length.

Aegean Airlines achieved excellent profitability during the 9 months of 2007.EBITDAR rose by 29% to €73.1m with the respective margin rising to 19.7% from 18.4%. Given higher aircraft leases, stemming from the addition of 3 new aircraft on our fleet in 2007, EBITDA increased 17% to €45.8m. Pre-tax profits showed an improvement of 36% to €41.7m from €30.7m. As a result, total cost per Available Seat Kilometer (CASK) dropped 7% to €8.3 cents, driven down by scale economies, increased RJ seat capacity (112 from 100 seats), distribution efficiencies and a stronger Euro against the US dollar.

Net earnings after tax for the 9-month period jumped 45% to €33.4mwith a respective margin of 9%. Net earnings growth for continuing operations was even higher, standing at 59%. Worth a mentioned is the fact that net earnings for the 3-month period to September 2007, the most important season for the business, rose by 22% to €27m with a respective margin of 17%, a performance that places Aegean Airlines amongst the top in the European Airlines industry.

As far as the traffic development is concerned, Aegean Airlines welcomed more than 4 million passengers on board during the 9-month period, achieving a 19% y-o-y growth. Domestic demand remained strong with passenger traffic up 12% to 2.6 million passengers, confirming the success of Aegean’s strategy to further strengthen its presence as well as stimulate demand in the domestic market. Growth in international routes was higher, reflecting efforts for further international network expansion, with Aegean Airlines transferring 1.5 million passengers, 34% more compared to last year. Scheduled services load factor eased to 70.3% as a result of the increase in average aircraft seat capacity and the introduction of new international routes, especially seasonal.  The number of average passengers per flight rose by 3% to 96 from 94.

Aegean Airlines networkcovers 7 countries on 30 year-round routes. In late 2006 Aegean Airlines opened Athens-Bucharest and Athens-Cairo routes while in early 2007, the company introduced new direct services from Athens to Frankfurt and Munich, code-shared with Lufthansa, whilst also doubling frequencies to Milan. As of mid September, the company is also adding frequencies to both Athens-Sofia and Athens-Bucharest, reaching 12 weekly frequencies each. The company’s objective is to gradually increase its coverage and flight density to European destinations so that business as well as leisure passengers are offered an attractive competitive product. The company’s international network will be enhanced with new destinations in 2008 which are due to be announced at the end of November 2007. 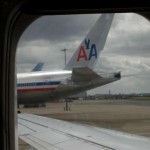 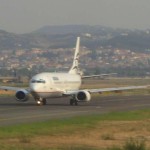 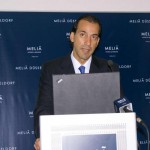 MELIÁ NET PROFITS UP BY 24% , EXCEEDING THE MARKET EXPECTATIONS

RevPAR maintains a positive trend, increasing by 8.5% -practically explained by price increases- and with further margin for improvement. Meliá.com increased its revenues by 34.3%. The globalisation of the company –already representing 80% of the Operating Profit- allows international growth to offset weak demand in Spain. 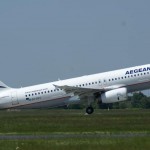 With the departure of A3 982, AEGEAN, the largest Greek carrier and a member of Star Alliance network, today inaugurated new direct service between Athens and Tbilisi, Georgia.