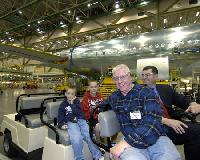 
The Boeing Company’s [NYSE: BA] Tour Center welcomed its three-millionth visitor Nov. 12. The Boeing Tour Center is part of the Future of Flight Aviation Center, which is a unique learning and interpretive facility designed to let visitors experience the marvel of commercial jet aviation and production.

The Boeing Tour Center is one of Washington state’s most-often-visited tourist attractions.

Al Varness, 71, from Kirkland, Wash., was the lucky three-millionth visitor. Varness, a U.S. Navy veteran and high school teacher for more than 30 years, visited the Boeing Tour Center with his grandchildren, Michael Petter, 11; and Adam Petter, 7.

Varness and his grandchildren were given a personal tour of the Everett factory. The tour included a close-up look at a Boeing 747-400 freighter and a Boeing 777-300ER (Extended Range) jetliner.

„I really enjoyed my trip to Boeing today – it was more than I expected,“ Varness said about his first trip to the tour center. „The factory tour really gave my grandchildren something special they will remember forever.“

Boeing began offering tours of the 747 factory in 1968. The factory tour has grown over the years to include a glimpse of all four widebody jetliners including the 767, 777 and the newest widebody, the Boeing 787 Dreamliner.

„This milestone highlights the incredible interest people from all around the world have for Boeing and the aviation industry,“ said David Reese, senior manager, Boeing Everett Visitor Relations. „During our first full year of operation as part of the Future of Flight in 2006, the center attracted more than 130,000 people, and we expect to break that record by welcoming more than 170,000 visitors this year.“

The three-millionth visitor marks another milestone during the site’s 40th anniversary. Visitors today have more to see than ever before. The 787 Dreamliner, the world’s first mostly composite commercial airplane, is coming to life in the factory and is expected to enter service in 2008. In addition to the Dreamliner, visitors can see firsthand how widebody airplanes are assembled in the site’s main assembly building, which at 98 acres (39.9 hectares) the Guinness Book of World Records acknowledges as the largest building in the world by volume.

The Boeing Tour Center is located at the Future of Flight just west of the Boeing Everett site in Mukilteo, Wash. For more information on taking the Boeing tour see http://www.boeing.com/companyoffices/aboutus/tours/.