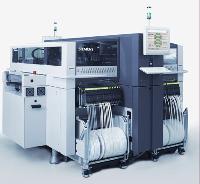 
At the 2007 Productronica trade show in Munich, Siemens unveils its new Siplace X4i to set a new benchmark in placement performance. The X4i is the world’s first placement machine to achieve a throughput of 102,000 components per hour in accordance with the IPC standard.

The new placement solution features a performance-optimized head and feeder arrangement. In addition to speed, the new model also features more flexibility for electronics manufacturers. Special features include the new i-Placement concept as well as the “Combined PCB” and “Productivity Lane” options that significantly enhance the performance of the new machine and subsequently of the entire line.

The Siplace X4i, which is based on the high-performance Siplace X-Series platform, achieves a speed rating of 102,000 cph as measured in accordance with the IPC 9850 standard. This value corresponds to a Siplace benchmark rating of 120,000 cph and a maximum theoretical performance rating of 135,500 cph. The machine’s newly developed “i-Placement” concept is responsible for most of this performance improvement. As before, two boards are moved into the placement area via the dual conveyor system. With traditional designs, one head picks up components while the other places its load on the PCB. On the Siplace X4i, on the other hand, each of the two heads populates one board independently of the other. This shortens the travel between feeders and PCB significantly and improves the productivity of the placement process.

The new “Productivity Lane” and “Combined PCB” options provide additional boosts in productivity and flexibility. The “Productivity Lane” is a third transport track on which PCBs are moved through the machine between its regular tracks to be processed in parallel on another machine. The result is a more efficiently balanced SMT line. It also makes it possible to perform maintenance on one machine while the rest of the line keeps working. The “Combined PCB” option, which involves pushing two boards together on a single track and processing them as a virtual single board, minimizes the non-productive time in applications where high-density and low-density boards (for example, tops and bottoms) are processed together.

The new Siplace-X4i placement machine is compatible with all existing models in the Siplace X-Series. With the performance jump provided by this machine, electronics manufacturers can give their productivity another boost and enhance their competitive position in the market. 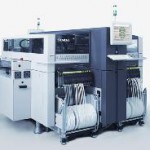