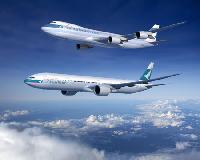 With today’s announcement, Cathay Pacific becomes the eighth airline to order the 747-8 Freighter, bringing the Boeing total to 73 orders for the highly efficient new cargo airplane. The new freighters will augment the airline’s fleet of 19 747 Freighters used to connect Hong Kong to a wide range of international markets.

The new 777-300ERs complement previous Cathay Pacific orders for 19 777-300ERs, as well a commitment to lease four additional airplanes through a third party. Cathy Pacific will become one of the world’s largest operators of the popular jetliner, eventually having 30 in service, and now holds the largest overall 777-300ER commitment among Asian carriers.

„This is a great day for Boeing and our friends at Cathay Pacific,“ said Larry Dickenson, vice president of Sales for Boeing Commercial Airplanes. „Our relationship goes back more than six decades and this will take us into the future together. We are delighted with this endorsement of our 747-8 and 777 by an airline as highly respected as Cathay Pacific.“

„These orders highlight our long-term confidence in the future of both the cargo and passenger markets in Hong Kong and confirm our commitment to developing our home city as one of the world’s premier aviation hubs,“ said Cathay Pacific Chief Executive Tony Tyler. „We are very excited about the 747-8 Freighter, which provides the highest payload of any commercial freighter. More importantly, this is a highly fuel-efficient aircraft which consumes 22 percent less fuel per revenue payload tonne than a 747-200F and 12 percent less than a 747-400F. Similarly, the 777-300ER is 22 percent more fuel-efficient than a 747-400 per payload tonne. The greater efficiency of both aircraft types is very important in these environmentally sensitive times and when fuel prices are at record highs.“

The 747-8 Freighter’s maximum structural payload capacity of 140 tonnes (154 tons) is unrivaled in the marketplace. The airplane upholds the 747 Freighter family’s legendary efficiency, with trip costs nearly equivalent to and 14 percent lower tonne-kilometer costs than the 747-400F. In fact, the 747-8 Freighter will enjoy the lowest tonne-kilometer costs of any freighter, providing unmatched profit potential to operators.

It offers 16 percent more revenue cargo volume than the 747-400F with slightly greater range — accommodating four additional main-deck pallets and three additional lower-hold pallets. Depending on the carrier’s needs, the 747-8 Freighter enables operators to choose between carrying greater revenue payload – up to an additional 20 tonnes (22 tons) – or flying up to 1,400 nautical miles farther in markets where cargo density requirements are lower.

Cathay Pacific received its first 777-300ER in September and is placing its 777-300ER fleet on nonstop routes to North America and Europe to capitalize on the airplane’s ability to carry full payloads on those routes. With its unmatched twin-engine fuel efficiency, the 777-300ER reduces fuel consumption – and CO2 emissions – by more than 20 percent per seat compared to its closest competitor.

The airline first announced its selection of the 777-300ER in 2005 and this announcement is Cathay Pacific’s third increase in its acquisition plans for the long-range jetliner. 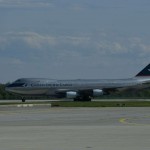 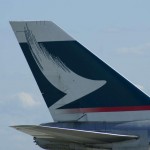