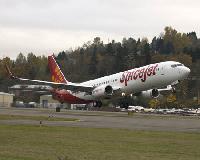 With this delivery, SpiceJet becomes the first India-based airline to operate the 737-900ER. SpiceJet originally announced its decision to purchase five 737-900ERs and five 737-800s at the 2006 Asian Aerospace Air Show in Singapore.

„We are proud to be the first Indian airline to operate the 737-900ER,“ said SpiceJet board director Bhulo Kansagra. „With its reliability, low operating cost and passenger comfort, the 737 provides value that is unmatched and supports our mission of being India’s preferred low-cost airline.“

All of the airplanes will be equipped with performance-enhancing Blended Winglets, which improve fuel efficiency and reduce CO2 emissions by up to four percent.

„The 737 plays an integral role in meeting the needs of India’s rapidly growing aviation market,“ said Dinesh Keskar, vice president of Sales, Boeing Commercial Airplanes. „We look forward to continuing to work closely with this valued customer as it expands its operations and serves its passengers.“

Boeing announced the launch of the 737-900ER program in July 2005. The 737-900ER incorporates a new pair of exit doors and a flat, rear-pressure bulkhead that allow a maximum capacity of 220 passengers in a single-class layout. Aerodynamic and structural design changes — including strengthened wings, a two-position tailskid, enhancements to the leading and trailing-edge flap systems, optional Blended Winglets, and auxiliary fuel tanks — will allow the 737-900ER to accommodate higher takeoff weights and increase its range to 3,200 nautical miles (5,900 km).

As of Oct. 31, eight customers have placed orders for 169 Next-Generation 737-900ERs. The 737 is the best-selling commercial jetliner in history, with more than 7,000 orders to more than 240 customers around the world. Boeing has nearly 1,800 unfilled orders for the airplane with a value exceeding $125 billion at current list prices.

SpiceJet, one of India’s newest start-up private carriers, operates an all-Boeing fleet and uses a single-class seating configuration on its short- and medium-haul flights within India. SpiceJet began service in May 2005 with three leased Boeing 737-800s and today operates more than 86 daily flights to 14 destinations.