Boeing to Showcase Advanced Range of Products, Services at Dubai 2007

Boeing to Showcase Advanced Range of Products, Services at Dubai 2007


The Boeing Company [NYSE: BA] at this year’s Dubai Air Show will spotlight a wide range of products and services producing record sales across commercial and defense markets. The show runs from Nov. 11-15.

„Boeing is proud of a partnership with the Middle East that stretches back more than a half century, and we are committed to meeting the needs of our customers throughout this fast-growing region and to further developing and expanding our long-term partnerships.“

Boeing has long considered the Dubai Air Show to be one of the world’s premier aerospace exhibitions and will be well represented with people, products and services.

On the defense side, daily flying displays by the F-15E Strike Eagle and F/A-18 Super Hornet will showcase the capabilities these next-generation fighter planes. Static displays will include the regional debut of Boeing’s 737 Airborne Early Warning and Control aircraft, in addition to an E-3 AWACS, B-1B Lancer, C-17 Globemaster III military transport aircraft and a UAE Land Forces AH-64A Apache. On the commercial side, Boeing’s valued customer Royal Jet will display a Boeing Business Jet.

Boeing will be represented by senior executives from across the company to talk about the company’s overall progress and underscore Boeing’s continuing commitment to its customers and partners in the Middle East.

Boeing will hold a series of briefings on key programs and issues throughout the show. Each day, media should check the briefing schedule at the Boeing sponsored Press Center for updates.

Note: All times listed below are local to Dubai 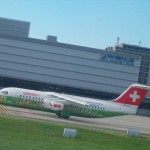